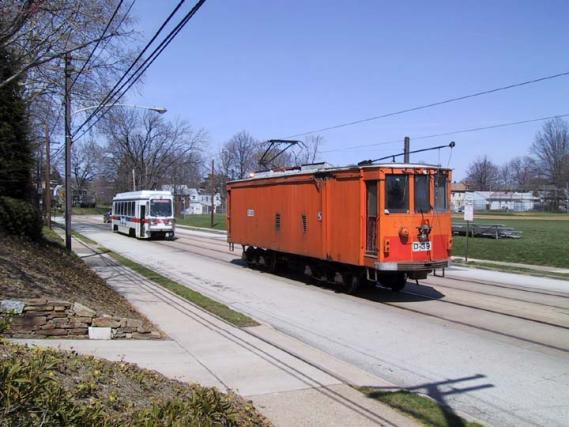 The car that is now known as D-39, which has a long and varied career, began its life in 1908 as PRT ash car 2621. It was constructed at Philadelphia Rapid Transit Company’s 6th Street (Kensington) Shops and was used to haul ashes from PRT’s power houses to several dumps located within the city. It was also used to haul garbage under a contract PRT signed with the City of Philadelphia in 1908. Upon the cancellation of the rubbish contract in 1915, PRT had a surplus of ash cars. 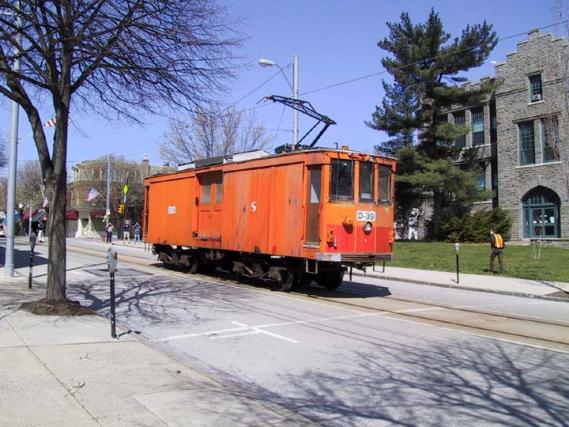 On a Rockhill Trolley Museum fantrip on April 6, 2003, car D-39 nears the end of the Rte. 101 Line in Media, suburban Philadelphia, PA. Photo by Peter Farrell.

Three of the old ash cars had their hopper bodies removed and replaced with enclosed wooden bodies. Ash car 2621 was constructed as freight car F-25. Declining freight revenues led PRT to end all trolley freight service on June 1, 1922. PRT found car F-25 too useful to scrap, and thus it served as a general work car until 1950. 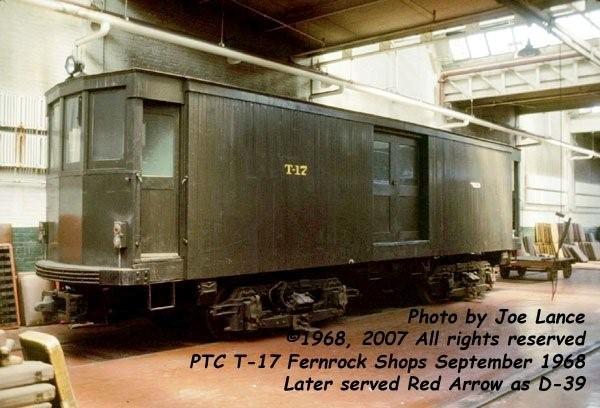 Trolley #T-17 as it appeared in its days on the Broad Street Subway.

Philadelphia Transportation Company, PRT’s successor, saw a new purpose for the long since outdated car in 1950. Its enclosed body structure made it an ideal vehicle to remove trash at stations along the Broad Street Subway at off-peak hours. Thus, in 1950 the car was transferred to Fern Rock Shops and converted to subway work car T-17. Interestingly, the original Curtis C-1112 trucks were retained and regauged to standard gauge. For the second time in its colorful existence, this car was again hauling garbage! The car was later outfitted as a tool car to carry supplies needed in the event of an emergency or wreck in the subway tunnel.

T-17 did not see much service by the late 1970’s, but would see a rebirth due to the disastrous Woodland Depot fire of 1975 that destroyed Tower Car D-38, used for overhead line repairs in the subway-surface tunnel. SEPTA had the car rebuilt at the Dushore Car Company in Topton PA, for use as a tower car, and the car was completed in 1984. Changes to the car included a new platform inside the car for working on the overhead wires, removal of one freight door, and remounting of trolley poles (trolley poles were removed when the car was transferred to the Broad Street Subway in 1950). The car also had its original 1908 Curtis trucks replaced with a rebuilt set of Brill 50E-2 trucks. The car was used briefly on the city routes, but was then transferred to the Media and Sharon Hill routes operating out of 69th St. Terminal. The car escaped retirement one more time. 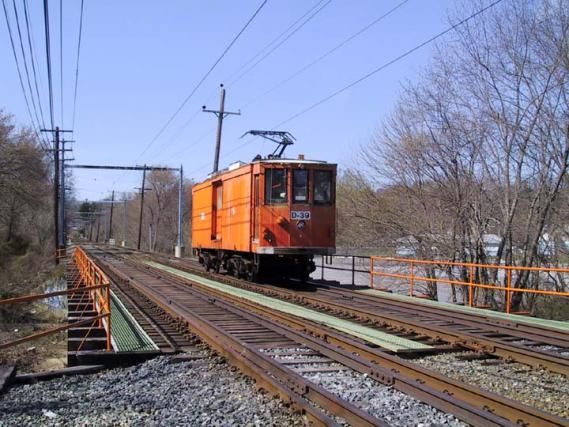 On a fantrip, April 6, 2003, car D-39 is captured on the trestle near Drexeline, Rte. 101 Media Line, suburban Philadelphia, PA. Photo by Peter Farrell.

D-39 served as the sole tower car on the Media and Sharon Hill lines from 1993 until 2002. D-39 served its intended purpose, repair and inspection of the overhead trolley wires, for the last time in December 2002. D-39 was finally retired from active service in the spring of 2003. 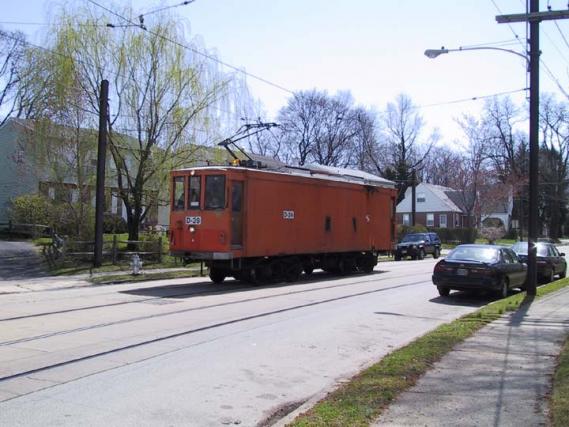 We see D-39 running in one of the few places left in the United States where streetcars continue to actually run…in the street! Photo by Peter Farrell, April 6, 2003, near Clifton-Aldan, Rte. 102 Sharon Hill Line, suburban Philadelphia, PA.

Rockhill Trolley Museum purchased D-39 in June 2003. D-39 left SEPTA’s 69th Street Yard early on the morning of November 20, 2003 and arrived at Rockhill the following day. Upon its arrival at Rockhill, the car was placed on its original 1908 Curtis trucks that were obtained in a trade with another trolley museum. These trucks were regauged to standard gauge when the car was transferred to the Broad Street Subway in 1950. This vehicle has quite a long and varied story to tell our museum visitors. 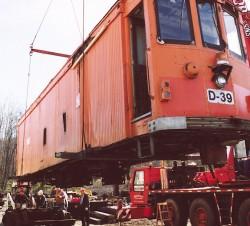 D-39 was delivered to the museum in November, 2003. With the carbody high in the air, volunteers use our skid loader to move the standard gauge trucks into position. These same trucks were under the car when it served on the Broad Street subway some years ago. Steel tubing used to support the carbody can be seen extending out from the nearest lifting sling.