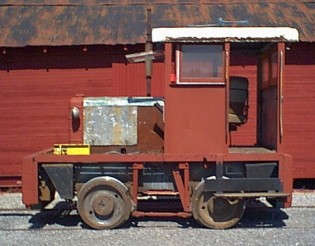 The Rockhill Trolley Museum has a variety of work equipment, and one of the most used pieces is our diminutive Brookville gasoline-powered locomotive. The history of this machine is somewhat clouded by history. We believe it was built around 1938-39.

The original purchaser of the Brookville is unknown. According to a source familiar with the locomotive, John Meehan & Sons–a contractor still in business in Philadelphia–bought the locomotive used. That company used the locomotive to build a section of the Broad Street subway in Philadelphia in the late 1930s. Meehan had an office in New York City, and the locomotive was apparently used on subway projects there as well. It was then leased to Conduit and Foundation Corp. of Philly, who also used it on New York City subway work. The next known use by Meehan was a repair job on the Broad St subway in the 1950s. 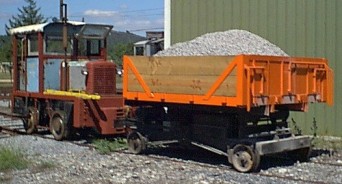 Although the Brookville is not technically part of our trolley collection, our volunteers are very fond of it. Because it was stored outside at our museum for many years, its cosmetic condition is poor. Now that it lives inside, it is receiving body repairs and painting as time permits. 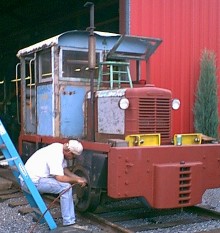 Many people know that Pennsylvania is home to General Electric’s locomotive plant in Erie. Not so many know that Brookville Equipment Co., founded as Brookville Locomotive Works, has been providing locomotives and mining equipment to the world for over 84 years. Brookville has recently even entered the trolley car market, rebuilding cars for New Orleans and Philadelphia. We are very proud to own and operate this interesting piece of our state’s transportation history.