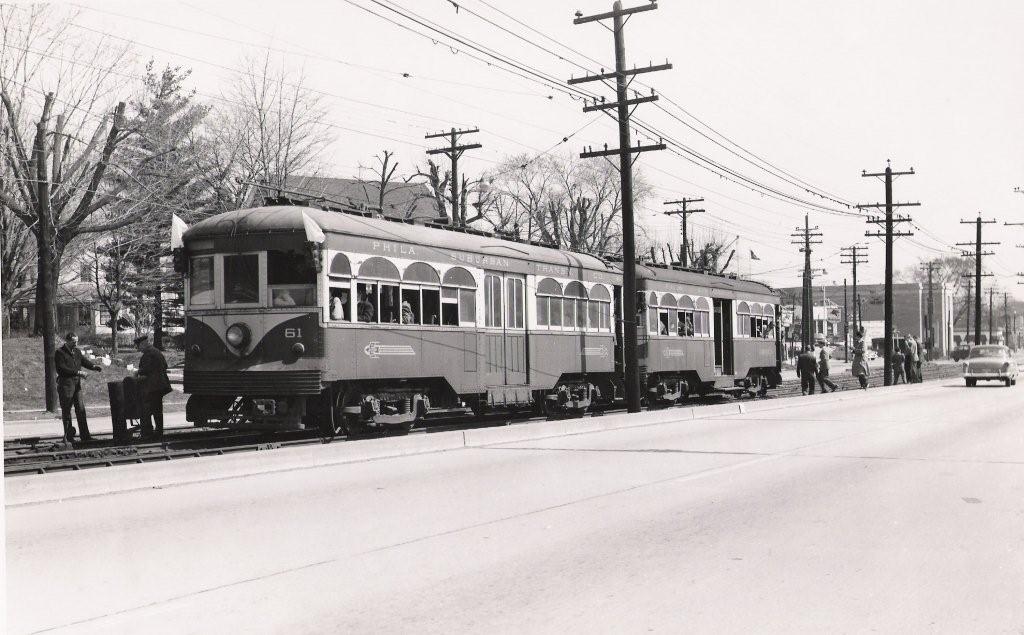 Our first trolley acquired from the Philadelphia area is center-door Car #61. This suburban trolley was built by the J. G. Brill Co. of Philadelphia in 1925 for a cost of $19,000. It was originally built for the Philadelphia & West Chester Traction Co. (P&WCT Co.), which later became part of Red Arrow Lines. 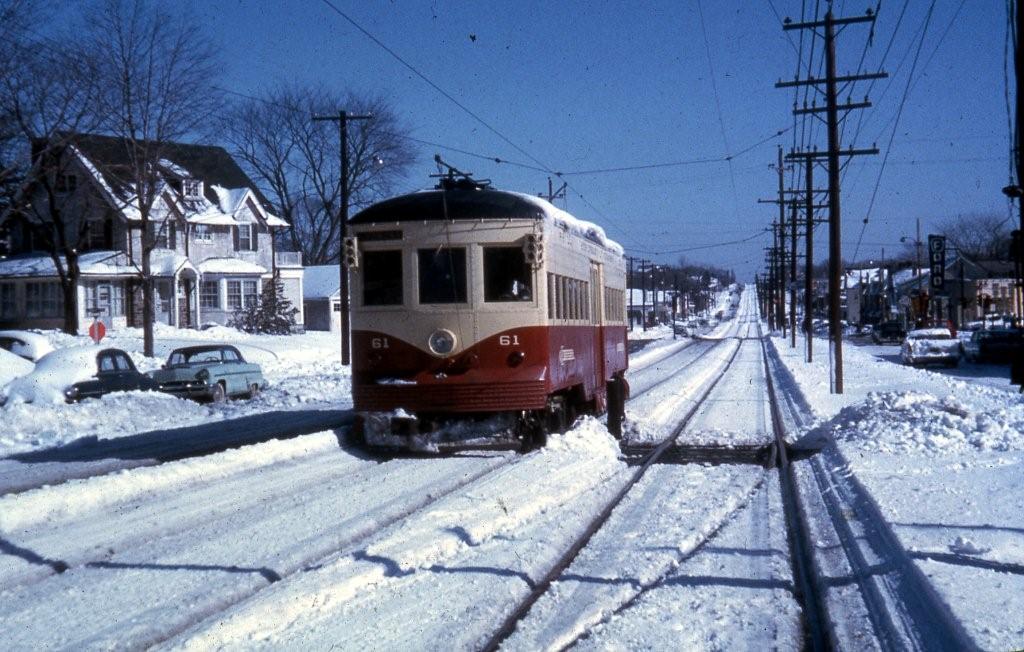 Red Arrow #61 In Snow Approaching Llanerch Junction February 1960 (Photo: Biles).
These cars were very good operating trolleys in the snow due to the height and weight of their wheels.

In the first part of the last century the P&WCT Co. could not handle the increasing crowds of riders with the existing fleet of cars. They ordered new cars very different from any former style. Known as a center-entrance car, #61 has two large sliding doors in the center of the car which enable passengers to be loaded and unloaded quickly. The high back leather seats and ornate trim work of previous trolleys were replaced by rather spartan interiors and rattan covered seats.

Car #61 operated from 69th Street Terminal in Upper Darby to Media, Sharon Hill, West Chester, and Ardmore. Car #61 could be operated as a single unit or together with another car as a train. These cars were always operated with a crew of two: a motorman and a conductor who operated the center doors and collected the fares. When they were operated in trains of two cars, two conductors and one motorman were required. Our museum acquired Car #61 in 1971. These center-door cars operated into the 1970s due to the large size of their wheels, which enabled them to run in deep snow without their motors getting wet. 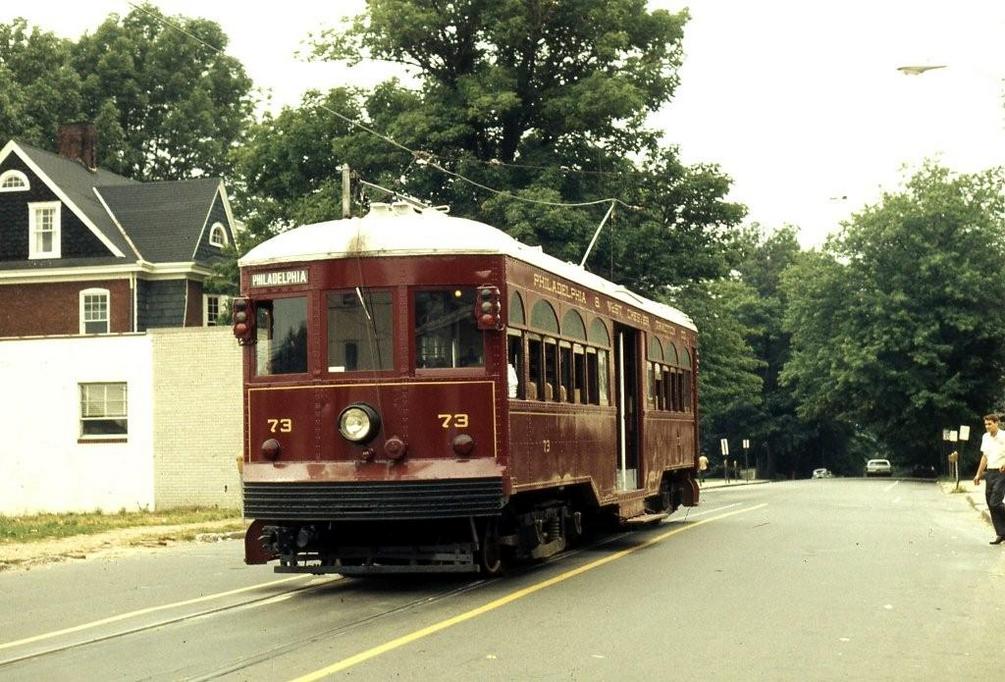 The line on which #61 operated was built to what is known as Pennsylvania trolley gauge, which is wider than our museum’s railroad standard gauge. The track gauge this car was built for is 5 feet, 2.25 inches, and the measurement for Standard gauge is 4 feet, 8.5 inches. Before Trolley #61 can operate at the museum, its trucks (wheelsets under the car) must be re-gauged, which is a very costly process. Nearly $25,000 has been spent on this project alone. The body of the car will also require many hours and dollars of restoration work before the car returns to service. 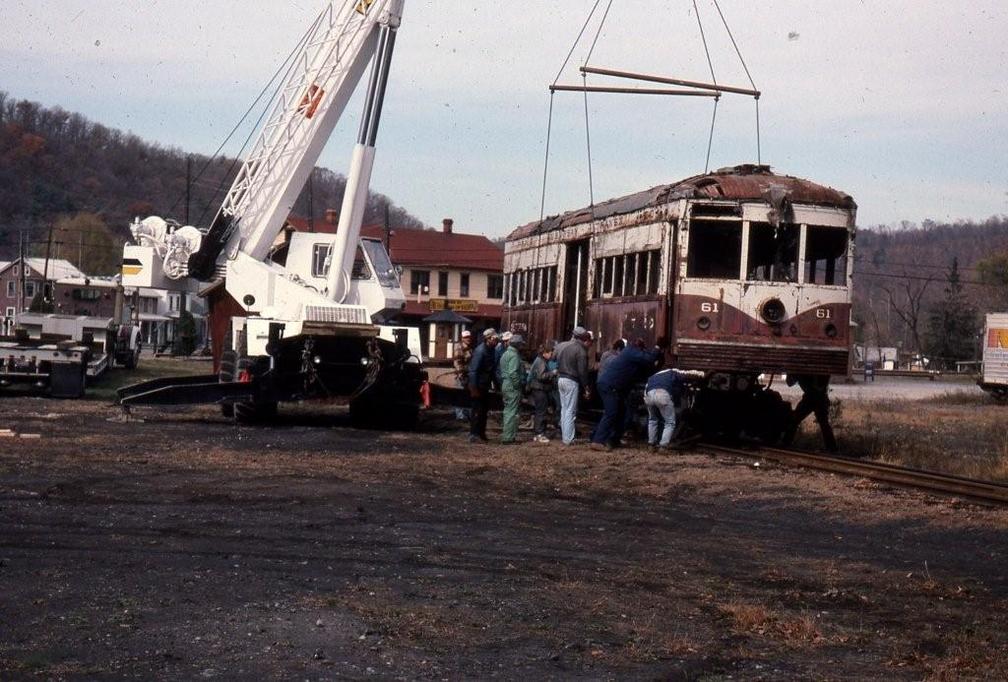 Trolley #61 was finally moved to the museum in 1991 and unloaded onto the track using a crane.