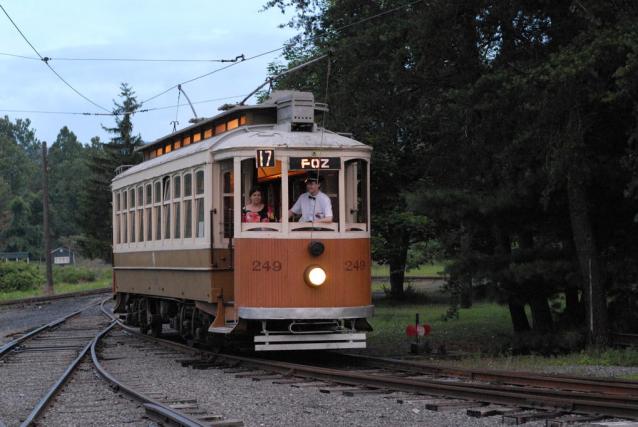 The J.G. Brill Co., located in southwest Philadelphia, was the world’s largest and most famous trolley car builder. Brill built car #249 in 1904 and exported it to Oporto, Portugal for service. It was originally built as an open platform car. 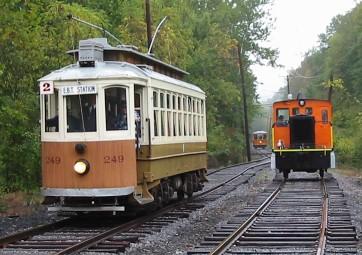 For some of its life, the car was used an a trailer car without motors and needed a motorized car to pull it! It has an uncommon seating arrangement, with two seats on one side and one seat on the other. The resulting narrow width made it easier for the compact car to wind through Oporto’s narrow streets. It is the only car in our collection with maxi-traction trucks, which have two different wheel sizes. 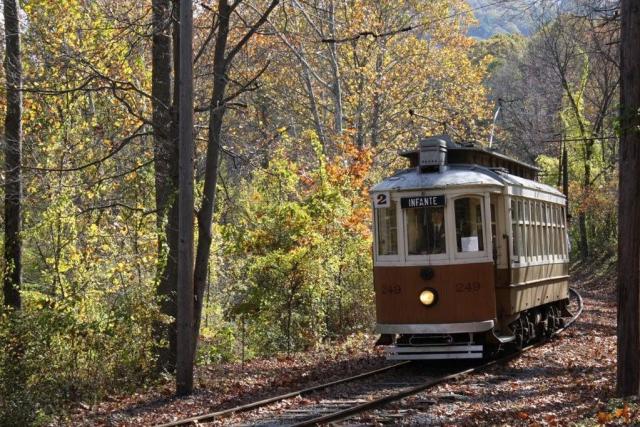 Known as a semi-convertible car, the windows on 249 can be raised into the roof of the car to create an airy ‘open car’ effect. The windows could be lowered quickly in the event of a rainstorm or cool weather. This Brill-built, designed, and patented car is typical of thousands of similar small cars that operated around small town and through the streets of United States cities. Semi-convertible cars like 249 replaced convertible and open cars on many systems, because they could operate year-round. 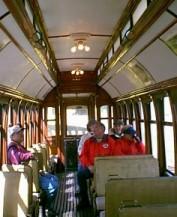 In 1924, car 249 was re-motorized with two motors, and continued serving citizens of Oporto until 1972, when it was retired. It was acquired by Rockhill Trolley Museum in October of that year. After being shipped across the Atlantic ocean in a large wooden box, 249 was unloaded in Philadelphia and trucked to the museum.

Unlike many other cars that have arrived at the museum needing years of costly restoration work, 249 arrived in good condition and entered regular service immediately. 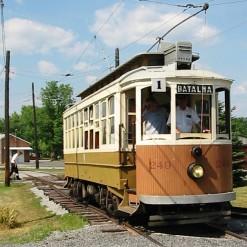 Trolley 249 is somewhat rare in having three separate braking systems: air brakes, hand brakes, and dynamic brakes. Air brakes are operated with compressed air which, through levers and rods, push brake shoes against the wheels. Hand brakes are operated mechanically by turning a large wheel on the platform of the car, which pulls a chain and in turn forces the brake shoes against the wheels. Dynamic brakes use the motors that normally propel the car as electrical generators. The force required to make electricity slows the car, and the excess electricity is dissipated in electric heating grids in a box on the roof.

Visit the comprehensive Tram of Oporto website
Visit the Oporto Tram Museum webpage (updated site not available in English yet!)