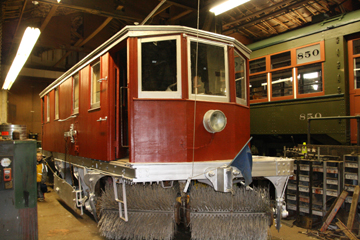 In exchange for its transfer of ownership of car #09 to National Capital Trolley Museum, Rockhill Trolley Museum acquires former Iowa Terminal Railroad 1911 vintage snow sweeper #3 as well as a pair of Brill trucks suitable for use under 1895 vintage former Valley Railways car #12. 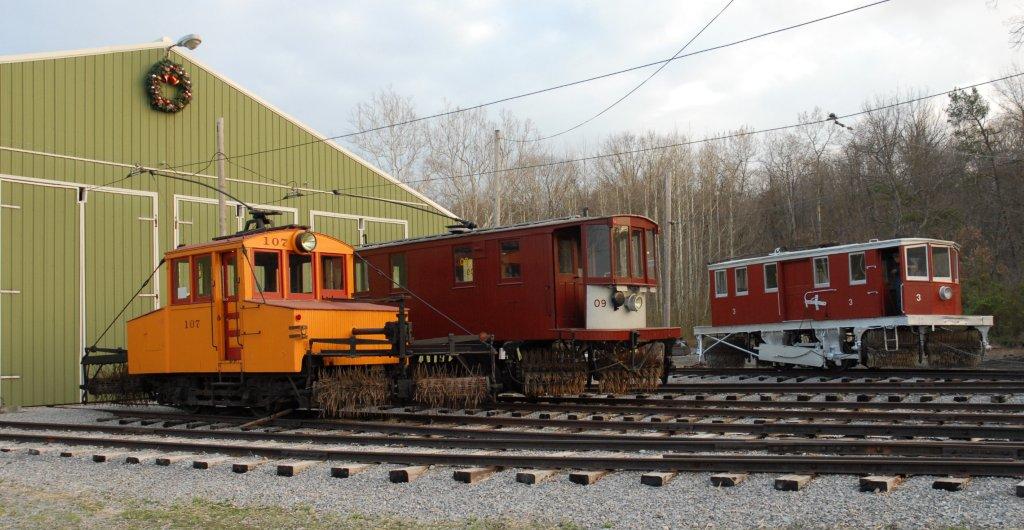 For a brief moment, there were three trolley snowsweepers on the rails of the Rockhill Trolley Museum! March, 2012

Former Iowa Terminal Railroad #3 was constructed in 1911 by the McGuire-Cummings company; the same entity that constructed DC Transit #09, and is representative of the style of snow sweeper used by electric railways from coast to coast that operated in colder climates. The car was cosmetically restored and made operable again by the Branford Electric Railway Association via a contract with the National Capital Trolley Museum which had acquired the #3 to offset the loss of DC Transit #07 after the tragic 2003 fire. Cars similar to #3 operated in several central Pennsylvania cities including Altoona, Harrisburg, and Johnstown. Along with car #3, Rockhill Trolley Museum acquires a pair of former Brill 27F trucks suitable for use under former Valley Railways car #12 as it operated in its last years of operation. Valley Railways #12 is one of only a few cars in existence built by the Jackson and Sharp Company and is the sole remaining car known to exist from the Valley Railways. The body of this car was saved by Rockhill Trolley Museum in 1985 after 52 years of use as a structure. Acquisition of suitable trucks for this car accomplishes a long-sought goal for the museum and moves this car closer to restoration as an operating exhibit.

The Rockhill Trolley Museum is one of the oldest continuously operating trolley museums in the Middle Atlantic, having operated trolleys every year since 1962. The museum offers a very scenic three mile round trip ride along scenic Blacklog Creek and is located across the street from the historic East Broad Top Railroad. For more information on the museum, as well as information on how to contribute to some of the other significant museum projects, when to visit and how to become a member, please visit www.rockhilltrolley.org.

The Rockhill Trolley Museum extends its thanks to Branford Electric Railway Association and National Capital Trolley Museum for their cooperative efforts to make this historic exchange of equipment possible.